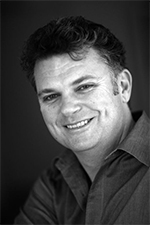 Paul Daley, a journalist of more than two decades experience, has worked as a political writer, an investigative reporter, a foreign affairs and defence correspondent, and a feature writer for major Australian newspapers. A former national affairs editor for the now defunct Bulletin magazine, he has also reported from conflict zones in Asia, the South Pacific, Europe and the Middle East. The Canberra-based writer and Fairfax politics columnist is the recipient of the Walkley Award for Excellence in Investigative Journalism and the Paul Lyneham Award for Excellence in Press Gallery Journalism.

In these pandemic times I conduct a daily privilege stocktake as I contemplate the months ahead | Paul Daley
Indigenous economies have been hit by coronavirus, but online art sales offer a ray of hope | Paul Daley
The Australian book to read next: A Cartload of Clay by George Johnston | Paul Daley
The room of the dead: how a museum became a halfway house for bones and spirits
The Australian War Memorial's expansion money would be better spent on traumatised veterans | Paul Daley