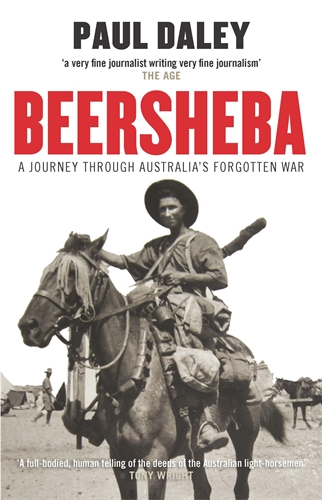 A Journey Through Australia's Forgotten War
Paul Daleys search for Beersheba takes him from Australia to Israel, from the battlefields to the archives, where he discovers a dark episode that sits at odds with the Anzac myth and legend.

It was a glorious triumph of arms for Australian forces, a romantic moment of dash and bravura that stood out in the tragedy of World War I. Yet it barely registers in Australia's national consciousness.In October 1917 members of the 4th Australian Light Horse Brigade took part in what is now known as the 'last great cavalry charge'. Waving bayonets overhead, they charged across six kilometres of open ground, cheating bombs, shells and bullets before capturing, in a desperate hand-to-hand battle, the Turkish trenches that held the key to the strategic stronghold of Beersheba. The charge was the last daring act of a day-long fight by combined British forces to capture Beersheba, and also a turning point in Britain's war against the Ottoman Empire, sending the Turks fleeing north to ultimate defeat.Yet the story has slipped through the cracks of history. Journalist Paul Daley's journey in search of Beersheba takes him from Australia to Israel, from past to present, and from the battlefields to the archives, where he discovers a dark episode in Australian history that sits starkly at odds with the Anzac myth and legend. For Daley, the Beersheba of then and now comes to take on new meaning.

Amid the false history over 26 January, it pays to consider what Australia was really built on | Paul Daley
WHO worries that Melbourne University’s links to arms industry will threaten joint medical research
The bedrock of our hope in 2021 and beyond must be political engagement | Paul Daley
Kate Grenville, Sofie Laguna, Julia Baird and others: the 20 best Australian books of 2020
My life’s paper trail was longer than I’d imagined. Culling it is no small challenge | Paul Daley