What became of the Mistake Creek massacre? 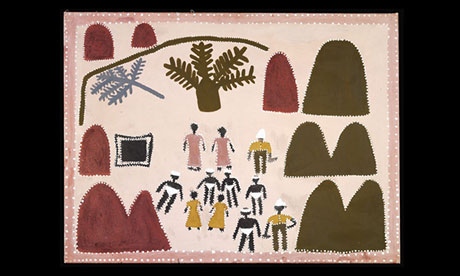 Some Australian historians will never agree with the Aboriginal people from around Mistake Creek in the eastern Kimberley on precisely who was responsible for the murder of up to eight indigenous men, women and children in 1915. There is no doubt that the massacre happened.

Furiously contested, however, is whether – consistent with indigenous belief – the killing party included white men or just Aborigines exacting revenge as part of an internecine feud.

The Indigenous Kimberley artist Queenie McKenzie held a clear view of what happened, based on her people’s enduring oral history of the events. In 1997 she painted Mistake Creek Massacre, which depicts both white and Indigenous armed men directing Aboriginal people to build their own funeral pyre before murdering them.

Thousands of Aboriginal people were killed in conflicts with European settlers on the Australian pastoral frontier during the 18th, 19th and early 20th centuries, some of them in massacres in which victims’ bodies were subsequently destroyed with fire.

But among a litany of crimes against Aboriginal people, the Mistake Creek massacre stands out for the ambiguity surrounding who did it and why.

Nonetheless, in November 2005 the National Museum of Australia – which stands with sculptural distinction on sacred Aboriginal land at Acton beside Canberra’s Lake Burley Griffin – purchased McKenzie’s contentious painting for almost $30,000.

It became an immediate focal point for the ongoing “culture war” between right-wing historians, journalists, commentators and the museum, over what conservatives viewed as the institution’s “black-armband” depiction of European colonial pastoral settlement and frontier violence against Aboriginal peoples.

So much so that in 2006 the museum’s council – weighted with conservative appointees by the Howard Government – rejected Mistake Creek Massacre for inclusion in the institution’s most significant collection, because it was deemed historically inaccurate.

But in May 2012, in a sign perhaps that the museum had permanently emerged from the cultural battle that had surrounded it since its opening in 2001, the council voted unanimously to incorporate the McKenzie painting into the same National Historical Collection. The decision, made without the blaze of publicity and acrimony that surrounded the painting’s 2006 rejection, was justified on the grounds of cultural significance rather than historical accuracy.

According to Indigenous belief, Mick Rhatigan, a former policeman and linesman, and his two Aboriginal workers, Joe Wynn and Nipper, attacked the camp of another black man, Hopples, and shot dead eight occupants. The attackers believed Hopples’ camp had stolen, killed and eaten a cow. They then burned the dead. Rhatigan and Nipper were arrested and charged. The fleeing Wynn was killed. Rhatigan and Nipper were freed.

According to the non-Indigenous story, neither Rhatigan nor any other white man was involved, and the killings resulted from a dispute that began when Hopples stole Wynn’s wife. According to this version, Wynn and Nipper attacked, using Rhatigan’s guns and horses, but without his knowledge. A survivor reported the incident to police, who arrested Nipper and later Rhatigan but killed Wynn as he fled. Rhatigan was released because he was found not to be involved, while an initial murder charge against Nipper was dropped when Aboriginal witnesses disappeared.

The museum purchased McKenzie’s painting after internal scholarly debate determined both accounts had aspects of truth.

While the council’s 2012 decision to admit the painting stemmed from a routine review of the museum’s broader working collection, progressive curators and historians at various national institutions are likely to view it as a major – and hopefully decisive – cultural victory.

But the museum’s immediate past director, Andrew Sayers, says the inclusion of Mistake Creek Massacre in the National Historical Collection “may appear to be more significant than it actually is”.

Sayers, who draws on his past experience as director at the National Portrait Gallery and senior posts at the National Gallery of Australia, this week leaves the National Museum, three years into his five-year term, for personal reasons. He says of the McKenzie painting:

“Now the curators recommended . . . that this work be considered for the National Historical Collection. In other words, not just the Museum’s collection but to be a part of the Museum’s core collection. The council determined that, given the significance of Queenie McKenzie as an artist, that it [Mistake Creek Massacre] was a significant object and should become a part of the National Historical Collection . . . It’s not as though this council decided that they were going to actively reverse a decision of a previous council – it was actually a part of the process of acquisition.

“Naturally the council was interested in the history of previous discussion about this object, and the reason that this was raised was of course the fact that . . . [former museum director] Craddock Morton. . . said that the council [in 2006] had taken the view that the painting was an inaccurate representation of an historical event – the Mistake Creek Massacre.”

Sayers was referring to Morton’s evidence to a Senate estimates committee hearing that “the issue which the collection committee was concerned about was whether this painting. . . will ‘assist in making a lasting contribution to understanding and interpreting Australian history and culture’.”

Morton told the committee: “The view of the committee was that as the painting depicted an event which did not occur – that is, a massacre involving white people – the painting did not fulfil the criteria of acceptance into the collection.”

When a team of museum curators reviewed the museum’s working collection in 2012, it refined its argument to include Mistake Creek Massacre in the National Historical Collection.

The curators argued: “The National Historical Collection includes a range of material reflecting interpretations of sacred and secular histories that may not be demonstrable in fact. Objects are collected to record the beliefs of different cultures and artworks provide insights into how individuals and communities interpret and respond to their social and historical conditions, including particular historical events. The criteria for assessing the significance of such collections relate not to whether representations are historically accurate but rather whether they reflect and illuminate Australian cultural practices . . . Mistake Creek Massacre records well-established Indigenous beliefs about the history of settler violence on the Australian frontier and illuminates ongoing processes of historical debate and understanding that relate to a core theme in Australian society.”

Yu says: “My interest is only to see the just recognition she rightly deserves as a great teacher and artist, and that she is recognised not only for her immense talents but also for her contribution through her art of fulfilling her customary obligation of preserving and transmitting her culture and tradition to her own people and, importantly, to a wider audience.”

Tensions surrounding the museum from its inception until the end of the Howard Government in late 2007, were heightened by the work of the conservative Australian historian Keith Windschuttle, whose The Fabrication of Aboriginal History challenged as ‘spurious’ notions of “frontier war” and the incidence of Aboriginal massacre as presented by other historians and writers.

Windschuttle directly challenged the accuracy of some museum exhibits about Aboriginal resistance and frontier violence.

Barnett reportedly played a lead role to ensure the McKenzie work was not included in the National Historical Collection.

The then head of the museum’s Aboriginal and Torres Strait Islander program, Michael Pickering, wrote in The Public Historian in February 2010: “In short one man, untutored in the history of the work, was sufficiently empowered by the incumbent government to contradict and override the advice of a group of professional historians on the basis of personal opinion only. What chance do historians have to address histories honestly when even today the questions remain over whose stories shall be told?”

In an interview before his departure, Sayers reflects that this politically charged atmosphere had dissipated by the time he began his directorship in 2010.

He said this was evidenced by positive reactions to a 2011 exhibition about the Canning Stock Route. It accurately depicted Alfred Canning, the grazier who blazed and blasted the track from Wiluna to Hall’s Creek, as cruel and sadistic to Aborigines.

“I expected people might be going to the barricades saying Canning was a great pioneer and . . . what you’ve done with it is you’ve just . . . showcased it as saying Canning was a brutal exploiter of aboriginal people. And I thought, ‘Yes, the mood really has changed.’ There seemed to be an acceptance that frontier violence is really a part of our history and we are now exploring that.”

Sayers cites the success of the Kate Grenville novel The Secret River and the subsequent stage play, as evidence of a growing acceptance of and popular inquiry into frontier violence.

“Whether we’ve reached a way of accommodating that, I don’t know. Perhaps the National Museum has played a part in that. But I think we are in a different place [today]. So then the question arises, ‘Well, what place were we in recently when council looked at this particular reconsideration?’ Well, I guess they took the view that this was a work of art.

“And I certainly took the view and would argue . . . that when it comes to works of art, well, actually the notion of historical accuracy is . . . something we shouldn’t necessarily be looking for, in the same way that perhaps we are looking for it in something which is avowedly documentary,” he says.

“I think that in a museum context, objects embody meanings in a whole lot of different ways and I think some of those meanings are projections . . . Both as a part of a shift but also as a part of a different way of looking at what constitutes appropriate objects for a national museum.”

Asked if he thought it was an enduring shift, he says: “Yes, I do. And that’s why I mentioned Kate Grenville’s The Secret River. It’s because I actually do think that there is an enduring shift. I think that culture is something dynamic and we, I think, will continue to grapple with the legacies of our past. And in fact the whole question of generational guilt and so forth are things I think that we do all have to constantly face up to. But in terms of the way in which that particular debate was framed and the role of Keith Windschuttle and so forth, and what constitutes accuracy and so on, I can’t see us going back to that.”

I point out that some of the same critics, including Windschuttle, are still working.

Sayers says: “Yes. But you might be a better judge than I am as to whether they are still significant voices – of the significance of their voices in terms of where the public lies. One can never predict the future.”

With a federal election imminent the cultural landscape is, indeed, unpredictable.

Albanese’s remarkable words on the frontier wars should have been said at the war memorial | Paul Daley
Prominent Collingwood members want serious reform of the board after the racism revelations | Paul Daley
Collingwood's racist past has finally caught up with its present – and its president | Paul Daley
Australia's air attacks in the Middle East ended three years ago – or did they? | Paul Daley
Amid the false history over 26 January, it pays to consider what Australia was really built on | Paul Daley